The children of narcissists are well-trained to be powerfully tuned into the desires of others. With the gentle help available in a therapeutic relationship, the child can learn to tap into their own desires and needs, to come to believe that their needs are not secondary to those around them, and to be able to first hear and then trust that the information comes to them from their bodies – feelings, bodily sensations, intuitions – is not noise to be ignored, but critical information to be taken seriously and honoured.

Being the child of a parent who exhibits narcissistic traits or narcissistic personality disorder can profoundly affect the way that a child learns to relate to others and themselves. It is not a genetically transmitted disorder, but the effects can be traced through generations. Strides are being made in understanding the origins of narcissism but it is, in large part, still not well understood except to say that it falls under the broad rubric of the bio/psycho/social: that is, the biological, the psychological, and the social. Though it’s not clear how narcissism originates, it is all too unfortunately clear in how it is injurious to the children of those who exhibit narcissism.

Narcissus (1597–99) by Caravaggio; the man in love with his own reflection

The following are some of the traits associated with narcissism:

●     Repetitive/obsessive interest in the perception of others

●     A grandiose sense of self, often times absurdly so

●     Near complete disregard for the needs of others

●     Powerful need for admiration from others

Narcissists do not often come to therapy of their accord, because narcissism is a particularly insidious condition, where in the person identifies closely with their own dysfunction — that is, their uniqueness and greatness. Narcissists don’t see narcissism as problematic in the way that people experiencing depression see depression as a problem in and of itself.

How do the children of narcissists fare?

Because narcissistic parents see their child as an extension of themselves — literally an outgrowth of their own body—the child may develop with a damaged sense of self. As we develop in the range of what we might consider “normal”, children learn autonomy and self efficacy. Growing up with a narcissistic parent, a child learns to see themselves primarily through the eyes of their parent. One client put it in the following way: “it is like growing up in the dark, constantly wishing for the light of my mother’s gaze to be cast my way.”

Because the children of narcissists are told either covertly or overtly that they belong to their parents, they (the children) tend towards hyper vigilance around the needs of others. We often label this “people pleasing”. The child is taught that the needs of the parent outweigh—or, perhaps, totally obliterate—the needs of the self. On the one hand, this leads to an out-of-balance relationship to the needs and desires of others—romantic relationships, work relationships, friendships, etc.—and on the other a sometime alien relationship to one’s own self. This has multiple downstream results, including the following:

●     Difficulty with trust, love, and intimacy 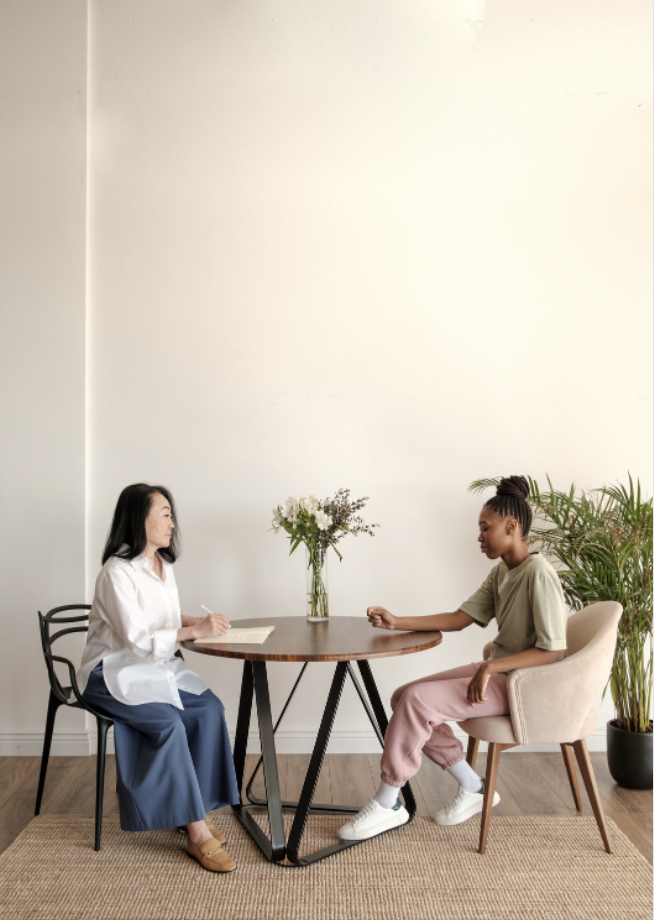 Therapy for Children of Narcissists

The children of narcissists are survivors of trauma. Full stop.

But, as noted above, there are traumas that are single events and there are traumas that occur over years. Psychiatrist and authorJudith Herman refers to the latter as “complex post-traumatic stress disorder” (C-PTSD). Working with and through C-PTSD can be a long process, but there is a path towards healing.

Nightingale Counsellors are trained to work with those children who have suffered the complex trauma of being in a relationship with a narcissistic parent. Not all children of narcissists present in the same way, but the following are some of the critical themes that will be addressed in therapy:

Many people that come to therapy as the children of narcissists are still in relationships with those people who have and may still be actively causing harm. Part of the therapy is for the client to determine how and if they can remain in relationship with the narcissistic parent. Even though the parent is the author of the child’s trauma, there can be a profound sense of loss if the child determines that contact must be severed. And irrespective of that painful decision-making process, a child of a narcissistic parent will often need to grieve the parent/child relationship and, indeed, the childhood itself to which they had no access, or limited access.

Developing A Sense of Self

With the gentle help available in a therapeutic relationship, the child can learn to tap into their own desires and needs, to come to believe that their needs are not secondary to those around them, and to be able to first hear and then trust that the information that comes to them from their bodies — feelings, bodily sensations, intuitions — is not noise to be ignored, but critical information to be taken seriously and honoured.

Being in a relationship with a narcissistic parent means having poorly set boundaries. Because the parent does not recognize the child as an independent subject but as an object that reflects their own self, there is no consideration around consent. The parent takes from the child what they need. It does not occur to the parent to ask. The child, having been trained to accept their subservience, grows up with a diminished or without the capacity to say”no.” But perhaps it is even more significant than that: the child grows up without the idea that they could say “no.”

In relationship with a Counsellor who is constantly communicating unconditional positive regard and is trained to understand the perspectival deficits of this complex trauma, the child learns to recognize the boundaries of their personhood. In learning to recognize that the other — their body, their desires, their. self —is separate from the child’s body, desires, and self, the child can begin to move through the world with a sense of confidence, more easily make decisions, and cultivate reciprocal, intimate, and loving relationships.

At Nightingale Counselling we offer pathways to healing for everyone. Book your free introduction session today !